BarreAmped is the result of more than 10 years of physiological study and client observations by one of America’s top fitness talents. 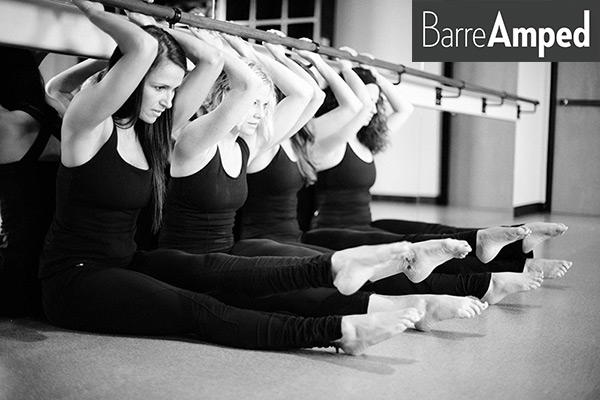 Basic Information:
Created by international fitness celebrity and former Lotte Berk Method instructor Suzanne Bowen, BarreAmped is the result of more than 10 years of physiological study and client observations by one of America’s top fitness talents. Precise form is essential to achieving optimal results in BarreAmped; thus, BarreAmped instructors are highly trained to correct and refine your positioning during each workout.

BarreAmped is not taught with a strong pelvic tuck which is classic to other barre exercise methods. BarreAmped instead teaches the student to focus control on the “Core Base,” which is the pelvic floor muscles and lower abdominal wall, in order to maintain torso control and a neutral spine. BarreAmped is a modern interpretation of a classic method. Our classes are filled with all types of people at different skill levels. Come experience a BarreAmped class for yourself & see the difference!

Most barre workouts today have their roots in the Lotte Berk Method, which was brought to America by Lydia Bach in 1970 and first taught in the Lotte Berk Method Studios in New York City. Lotte Berk herself was a German dancer who fled the Nazis during World War II. She moved to London with her British husband, kept dancing, but suffered a back injury falling off the stage. During her recovery, Berk worked with orthopedic doctors, combining her rehabilitative therapy with ballet barre work to form a new system of exercise.
BarreAmped® is a direct descendant of the original Lotte Berk Method. Suzanne Bowen, an international fitness celebrity and former Lotte Berk Method instructor at the Lotte Berk Method Studios, founded BarreAmped® after more than 10 years of precise training in the method under the direct tutelage of Bach herself, physiological study, and client observations. A second generation barre instructor, Bowen therefore created an undiluted form of barre work with a strong focus on form in order to get the true benefits of using classic barre techniques. Her method emphasizes neutral spine and pelvic floor engagement to fire up the core.

BarreAmped is an intensive body shaping experience designed to produce reliable results, no matter the client. The method is influenced by classical and modern dance (though it is not a dance class) and utilizes a barre to achieve optimal positioning. Insights from Pilates, yoga, and orthopedic stretching also balance the method’s unique approach.

The precision-oriented technique focuses mainly on small, isolated movements within deeply held and challenging postures. BarreAmped is proven to increase metabolism, burn fat, and lengthen tight muscles. With commitment to the technique, you get recognizable results exactly where you want them.

BarreAmped Fire is a great class for experienced BarreAmped clients. It relies heavily on the client’s proven technique, flexibility, & strength. It includes full range of motion moves, quick transitions, elements of cardio, and advanced dynamic stretching. A minimum of at least 10 BarreAmped classes is recommended before entering this class.

BarreAmped Boot Camp uses the classic foundation of BarreAmped combined with cardio intervals. This program relies on high intensity interval training, which has been proven to burn fat faster than sustained endurance training, making it suitable for ALL fitness levels. BarreAmped Boot Camp will shake up your workout! This class is the most fun & effective way to burn fat, lose weight and change your body.

Love Barre class! Always challenging and no one is ever judgmental. Looking forward to trying new classes soon.

Rebecca and her staff are motivated by the latest knowledge of how the body works, not by the latest exercise fads. Simply, they are the best!

Nothing makes @annemkarr happier than helping people work towards achieving their fitness goals and find joy and happiness in movement. Join her on the Bellicon Thursday’s at 8:30AM#bellicon #belliconbounce #belliconbalance #fortwaynefitness #fortwayne #fortwayneindiana ... See MoreSee Less
View on Facebook
· Share

Find new ways to move your body in 2023 🦵🤸‍♀️🚴‍♀️ We’re ready for you to try out all of our group classes (especially our two new classes!) Visit our website to learn more and get started #mindfulmovement ... See MoreSee Less
View on Facebook
· Share

Experience the magic of MELT® with your Valentine or Galentine! This 75-minute MELT® class will leave you feeling less stressed, more relaxed, more in tune with your body, and in love with the MELT® Method. #melt #twoeeswinery #fortwayneevents ... See MoreSee Less
View on Facebook
· Share

So many amazing options for you to choose from! Find a group class (or 2 🤩) that fits your schedule. #mindfulmovement #pilatesclass #groupexercise #exerciseclass #fortwayne #fortwayneindiana ... See MoreSee Less
View on Facebook
· Share

TRX has the tools everyone needs to set themselves up for success all. year. long. And we’re here to teach you on it! Perfect for all fitness levels, because you choose the intensity. Sign up for a class with us today. #trx #trxtraining #trxsuspensiontraining ... See MoreSee Less
View on Facebook
· Share

Looking for something unique for Valentine's Day this year? Join Valerie and Rebecca for a Valentine MELT Class at TWO-EE's Winery. Learn about this gentle self-care technique that helps you reconnect, rebalance, rehydrate, and release your body for stability, mobility, and a healthy, active life. Tickets are on sale now and include a 75-minute MELT class, a glass of wine/slushee, food, and a chocolate gift. Sign up today!powersofone.com/news/valentine_melt_class_2023 ... See MoreSee Less
View on Facebook
· Share

Start with small steps toward a monumental changes. Tap the link and sign up for a group class. momence.com/u/mindful-movements ... See MoreSee Less
View on Facebook
· Share

Foot pain? Back pain? Bunions? Let’s help get you right. Work with us for only 14 days, and feel the difference. Starting tomorrow 1/16momence.com/Rebecca-Bell/14-Days-To-Happy-Feet---LIVE-MELT®-Mini-Foot-Treatment-Program/81283677 ... See MoreSee Less
View on Facebook
· Share

With Our Monthly Email Newsletters